Executive Summary
Medical tourism has become a major focus of research and policy interest in the Global South in recent years. Much of the discussion focuses on the motives and impact of Europeans and North Americans who travel to develop­ing countries for lower-cost medical and health care. One recent over­view of the global medical tourism industry identified three major hubs (Thailand, India and Singapore) and three minor hubs (Costa Rica, Hungary and South Africa) for North-South medical tourists. Medical tourism operators, facilitators and service providers generally advertise South Africa as a cosmetic tourism destination. The most popular pro­cedures for European medical tourists are hip replacements, rhinoplasty, breast augmentation, liposuction, facelifts and tummy tucks. In other words, South Africa is seen as an archetypal medical tourism destination, combining a medical (elective) procedure with related travel and tourism activity. This paper first reviews the operation of the private sector indus­try in South Africa and the role of medical facilitators in particular. It shows that the industry is premised on a highly romanticised and stylised image of South Africa which stresses the quality of the country's private healthcare system and its numerous tourist attractions.
The paper shows that cosmetic surgery is only one small segment of medical tourism to South Africa. A great deal of medical tourism to South Africa is not from the North at all, but from other African coun­tries. The number of medical migrants to South Africa increased from 327,000 in 2006 to over 500,000 in 2009. Around 4.5% of total entries were for medical treatment which, became relatively more important over time (rising from 3.9% in 2006 to 5.0% in 2010). The Global North generated a total of 281,000 medical travellers over this time period while the Global South was the source of over 2 million The South African case therefore offers an important opportunity to examine the dynamics of South-South and intra-African travel for medical treatment. Just as South-South migration has generally been ignored, there is a danger that the same will happen to South-South medical tourism. This is unfortunate as South-South medical migration is growing rapidly and challenges conventional notions of medical tourism. This paper aims to reinstate intra-African medical tourism and migration as an important topic worthy of further research and policy attention.
South-South movement to South Africa for medical treatment is far more significant, numerically and financially, than North-South move­ment. Two major forms of South-South medical migration (or medical travel) to South Africa from the rest of Africa are identified. The first is the growth in medical travel from East and West Africa to South Africa. These travellers spend more in South Africa than any other traveller (including those from the North) and are generally middle-class Africans seeking specialist diagnosis and treatment. The second, making up over 80% of the total medical travel flow to South Africa, are formal and informal movements from countries neighbouring South Africa (especial­ly Lesotho, Swaziland, Mozambique and Zimbabwe). Very little is known about this movement beyond the basic dimensions of the flow.

Public health systems in countries neighbouring South Africa are in a state of crisis, under-resourced, understaffed and overburdened. The problem is exacerbated by the ongoing brain drain of doctors and nurses to South Africa and overseas. The countries neighbouring South Africa have much worse patient to doctor and nurse ratios than South Africa or the recommended WHO minimum. Southern Africa is also the epicentre of the global HIV and AIDS pandemic, which has increased the burden of disease on health systems by increasing the demand for treatment and palliative care, imposing heavier workloads on health care workers, reducing the workforce by infecting health care workers and imposing psychological stress on health workers who have to administer palliative care, leading to low morale, burn-out and absenteeism.

The general lack of access to medical diagnosis and treatment in SADC has led to a growing temporary movement of people across bor­ders to seek help at South African institutions in border towns and in the major cities. These movements are both formal (institutional) and infor­mal (individual) in nature. In some cases, patients go to South Africa for procedures that are not offered in their own countries. In others, patients are referred by doctors and hospitals to South African facilities. But the majority of the movement is motivated by lack of access to basic health­care at home. An analysis of exit survey data reveals the following about the movement:
The high demand and large informal flow of patients from countries neighbouring South Africa has prompted the South African govern­ment to try and formalize arrangements for medical travel to its public hospitals and clinics through inter-country agreements. South Africa has entered into bilateral health agreements with eighteen African countries. Bilateral agreements can be seen as an effort to formalise and manage these movements and obtain payment from governments for the cost of treating non-residents. Some SADC governments have set up special funding mechanisms (such as the Phalala Fund in Swaziland) to pay the medical costs of patients who go to South Africa for approved treatment. However, these special funds have been plagued by corruption on both sides of the border to the detriment of patients.

The European Journal of Transnational Studies has released a special issue on Transnational Health in Asia. The full text is available in PDF at http://www.transnational-journal.eu/5_1_2013/EJOTS2013_01.pdf

Medicine and tourism have become separated in contemporary popular consciousness. The former implies anything but a pleasurable experience and the latter presumes a healthy disposition for participation. We argue that this popular conception of the separation of tourism and medicine ignores an historical continuity of lineage from the 18th century pursuit of a 'cure' at resorts and spas, to 20th century notions of holidays as worker welfare through to global patient mobility in the quest for cutting-edge medical interventions in so-called 'untreatable' conditions. Disciplinary divisions within the academy have reinforced the separation between medicine and tourism in popular culture, but there is now an emergent challenge to re-think the medicine/tourism nexus. Under the influence of transnational health care consumption, two very contrasting traditions of Western thought are now confronting one another. This book provides a comprehensive landscape of diverse research communities' attempts to capture its implications for existing bodies of knowledge in selected aspects of medicine, medical ethics, health policy and management, and tourism studies.
Posted by Meghann Ormond at 14:29 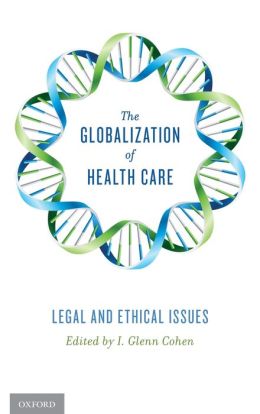 The Globalization of Health Care (I.Glenn Cohen, ed., Oxford University Press, April 2013) offers a comprehensive legal and ethical analysis of the most interesting and broadest reaching development in health care of the last twenty years: its globalization. It ties together the manifestation of this globalization in four related subject areas - medical tourism, medical migration (the physician "brain drain"), telemedicine, and pharmaceutical research and development, and integrates them in a philosophical discussion of issues of justice and equity relating to the globalization of health care. The time for such an examination is right. Medical tourism and telemedicine are growing multi-billion-dollar industries affecting large numbers of patients. The U.S. heavily depends on foreign-trained doctors to staff its health care system, and nearly forty percent of clinical trials are now run in the developing world, with indications of as much of a 10-fold increase in the past 20 years. NGOs across the world are agitating for increased access to necessary pharmaceuticals in the developing world, claiming that better access to medicine would save millions from early death at a relatively low cost. Coming on the heels of the most expansive reform to U.S. health care in fifty years, this book plots the ways in which this globalization will develop as the reform is implemented.
Posted by Meghann Ormond at 14:26