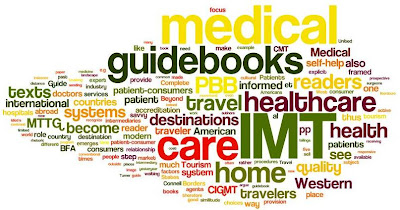 Drawing on literature on self-help and travel guide writing, this paper interrogates five international medical travel guidebooks aimed at encouraging American and British audiences to travel abroad to purchase medical care. These guidebooks articulate a three-step self-help “program” to produce a “savvy” international medical traveler. First, readers are encouraged to view their home healthcare system as dysfunctional. Second, they are encouraged to re-read destinations' healthcare landscapes as hosting excellent and accessible care. Finally, these texts explicitly enjoin readers to see themselves as active, cosmopolitan consumers whose pursuits are central to rectifying the dysfunction of their home healthcare systems.

Valorie Crooks, Rory Johnston and Jeremy Snyder (Simon Fraser University, BC, Canada) and Meghann Ormond (Wageningen University, The Netherlands) recently received funding from the Canadian Institutes of Health Research for a project entitled 'Is It Really About Sun, Sand, and Stitches? Planning for Research on Jamaica's Developing Medical Tourism Industry'.

Medical tourism (MT) occurs when patients leave their home countries to intentionally access non-emergency medical care abroad. A number of criticisms exist regarding MT, including that it threatens patients' safety, continuity of care, and abilities to give informed consent. This Planning Grant proposes activities in Jamaica to lay the foundation for an Operating Grant. We focus on Jamaica because it is actively pursuing MT development. The Operating Grant will explore if and how MT stakeholders in specific countries in the Caribbean region assess the transferability of policy and planning initiatives from other countries prior to acting on them. Assessing transferability is important with trade policies that have direct ties to population health, as is the case with MT. Working with Jamaican collaborators from various sectors, we will undertake onsite research development activities in Oct/12 that will include holding meetings with MT stakeholders and touring public and private health care facilities. In undertaking these activities we will create a network of collaborators and knowledge end users to enable an integrated knowledge translation approach to the Operating Grant being developed. MT development in Jamaica and the wider Caribbean holds important implications for Canada. Canadian patients are traveling to the Caribbean for private medical care, Canadian companies are investing in the MT sector in the region, and Canada is a signatory to global declarations that work to ensure health globally. Our proposed activities are also consistent with CIHR's global health goals. This Planning Grant is premised on the exchange of knowledge and ideas across sectors through engagement with MT stakeholders, including our collaborators, in Jamaica. In addition to developing an Operating Grant, we will write an article for Globalization & Health and prepare a short report. These outputs will be circulated widely through our own and our collaborators' networks.

Session description
Theoretical perspectives on bodies and embodiment have blossomed in recent years, so that we no longer take for granted the ordinary ways that bodies survive, thrive, move, and occupy space. These theories integrate biologically, physiologically and socially traceable catalytics of bodies (Mol 2002), but also invisible, affective, and forceful sensations of bodies (Stewart 2007). Between these two poles, we intend this session as an opening towards theorizing how bodies, and entities in assemblage with them, are materially transformed through these processes. To do so, we focus on how bodies become mobile, by empirically considering technologies, adaptations, intensities, and materialities through which bodies take up space in movement, and the ways the material and social world morphs to accommodate them. As such, we seek papers that focus on practices of embodiment or the repositioning of bodies in mobility or to become mobile.
Discussant
Alan Latham (University College London)

Papers
Cars from ‘outside’: Embodied mobile materialities of summertime diasporic visitors in Morocco
Lauren Wagner (Wageningen University, The Netherlands)
Some of the most resonant signs of the annual summer ‘return’ to Morocco of Moroccan migrants living in Europe and their diasporic families represent their cars. Images of ‘vehicles surchargées’ travelling South is part of the permanent collection in the French national museum of immigration; such vehicles are infamous for creating traffic on the route through France and Spain, towards the ferry ports on the southern shore. The 700,000 or so of these cars crossing the Mediterranean increase the tally of vehicles in Morocco by nearly 50%. European plates become as common as Moroccan ones, representing the bodies inside them as ‘maghrarba min el-kharij’ or ‘Moroccans from outside’.
This paper explores interactions and occupations facilitated by cars for these next-generation ‘Moroccans from outside’, or diasporic visitors, as they seek and explore leisure spaces in Morocco on their summer holidays. From their European departure point to their Moroccan homes and leisure spaces, cars play an important role in their experience of Morocco as branded and visible commodities and as devices for mobility. Moving through Moroccan spaces, they become materially embodied through cars: at distances private vehicles can take them, speeds at which they can travel, and sticking points that congregate them voluntarily or stop them involuntarily, rendering them invisible and visible through vehicles as being ‘Moroccan from outside’.

Embodied mobilities in sub-Saharan Africa: Children’s bodily experiences of load carrying
Gina Porter (Durham University), Kate Hampshire (Durham University), Albert Abane (University of Cape Coast, Ghana), Elsbeth Robson (Durham University / University of Malawi), Alister Munthali (University of Malawi)
This paper draws on empirical data regarding children's bodily experiences of load carrying in urban and rural areas of Ghana and Malawi. Wherever transport services are deficient, or households lack the purchasing power to acquire transport equipment or pay fares, much everyday transport work needed to sustain the family and household is delegated to young people. They tend to occupy the lowest rung in the social hierarchy and the carrying they are expected to do can be interpreted as embodied, performed and 'naturalized' social position. Young porters do not merely perform their tasks but, through the bodily positions they take up, are seen to enact their social position as servants to their (adult) masters. Carrying is thus arguably a daily reaffirmation of mobile servility. The complex intertwining of perceptions about physical capabilities and gender stereotyping supports this interpretation: trucks are too hard for girls to push, yet girls are expected to contribute more than boys when it comes to porterage. Girls are trained in the embodied skill of headloading because they will be expected to draw on this throughout their lives. The load they carry is increased gradually over time in this careful body management. They can be construed to be building up body capital (Jackson 1997). Drawing on investigations conducted by young people aged 11-19 as co-researchers, together with in-depth interviews and a survey of 2,000 children aged c. 9-18 years conducted by academic researchers, we examine the scale and potential implications of children's load carrying activity.
Mobilising passenger bodies in international medical travel
Meghann Ormond (Wageningen University, The Netherlands)
The pursuit of medical treatment abroad has often been limited by dissuasive distances and barriers that require travellers with health conditions to tolerate long, uncomfortable hours in transit. A growing number of low-cost airlines, long-distance coach and ferry operators in Indonesia and Malaysia, however, – keen to benefit from disparities in the two countries’ health systems and improve Malaysia’s standing as a regional medical hub – are increasingly working to make medical travel more attractive and accessible. In offering faster and more frequent linkages to Malaysian hospitals to handle routine check-ups, chronic needs and evermore acute conditions, they have both expanded the physical and geo-political scope and increased the immediacy of care provision. Airlines have begun to contemplate retro-fitting their aircraft with spaces for stretchers and ambulances meet planes on airport tarmacs, foregoing traditional immigration and customs border procedures, so as to facilitate smoother cross-border transitions for an increasingly desirable mobile population of differently-abled bodies and the suitcases of cash which pay for their treatments and construct them as legitimate medical travellers in Malaysia. This paper draws on transport experiences of Indonesian medical travellers pursuing care in Malaysia in order to examine the material prosthetics that help constitute and mobilise ‘passenger bodies’ (Bissell 2010) in international medical travel.